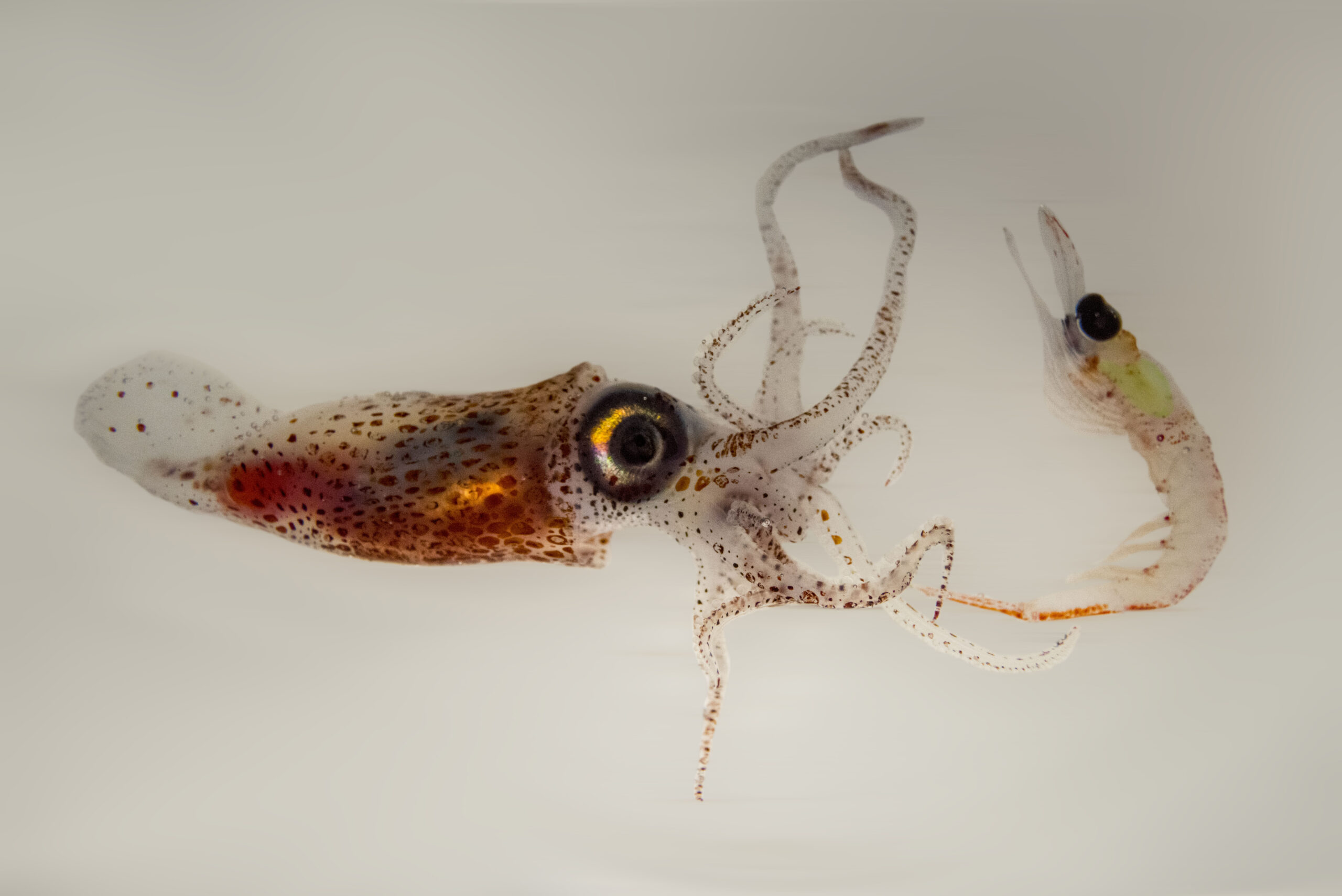 Hello! I hope you all had a great week. We had a chance to see some beautiful icebergs. Of all the scenery down here, they are definitely my favorite. Waves carve away the ice to create unbelievable structures. 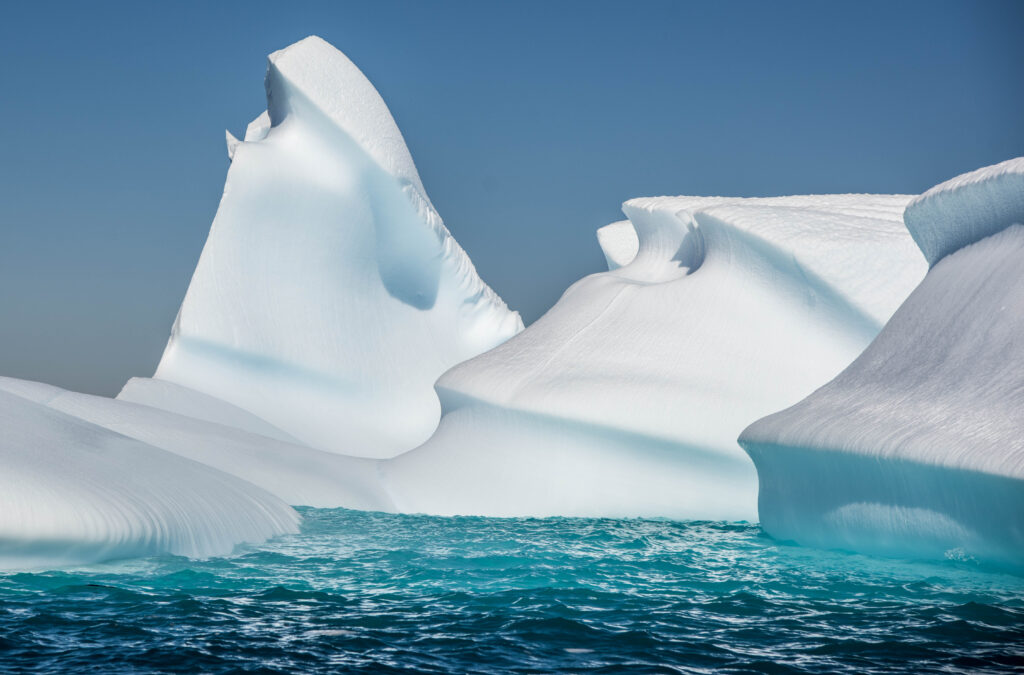 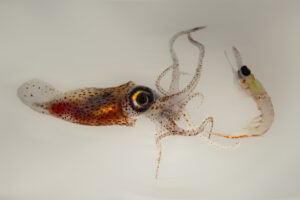 So, it seems like many of you were able to identify this week’s mystery creatures: a squid eating a krill. The squid is a juvenile Alluroteuthis antarcticus. The red dots that cover its skin are called chromatophores. They are special cells that allow the squid to change its color to blend in with its surroundings.

The krill is called Thysanoessa macura. It can be difficult to distinguish from the other krill species in the identification key, Euphausia superba. The main difference is that T. macura has a bean-shaped eye.

All species of krill are incredibly important components of the Antarctic food web. They eat phytoplankton, which are very small marine organisms that convert sunlight to energy through photosynthesis. Phytoplankton can be green-colored, like many terrestrial plants, which is why the krill’s stomach is normally green as well.  Krill are then eaten by whales, seals, seabirds, and fishes in the Southern Ocean.

It turns out that humpback whales have a unique, cooperative strategy for eating krill called bubble-net feeding – check out this photo of humpbacks caught in the act! Dr. Julian Dale, who is also part of the PAL LTER group, took the picture using a drone.  One whale has its mouth wide open (in the center) and you can see another whale just above it. 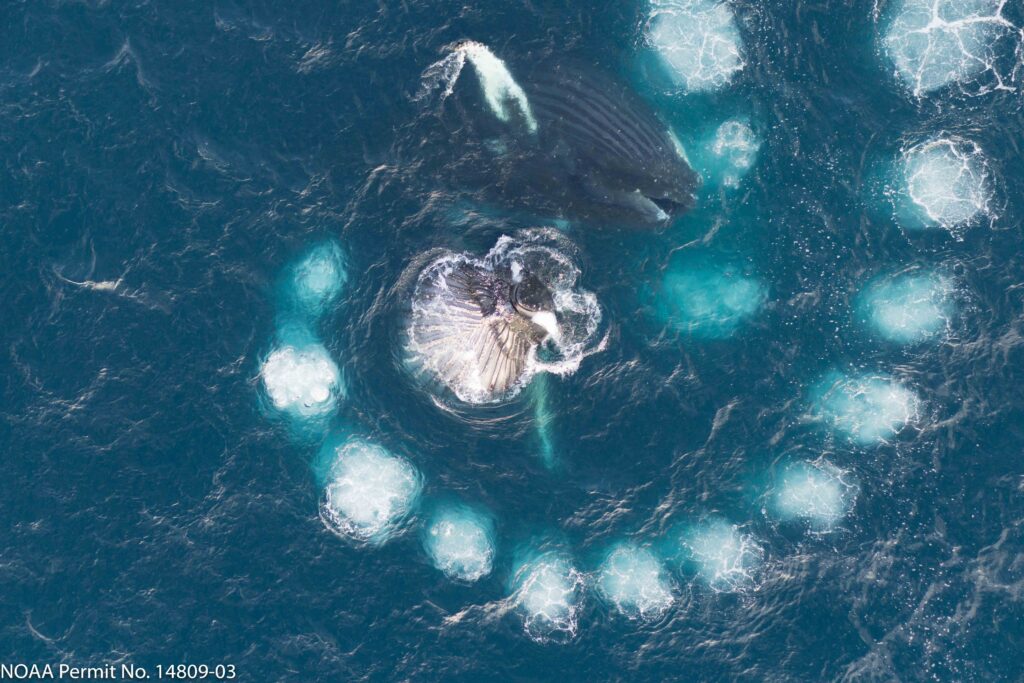 This photo was taken by members of the Duke University Marine Robotics and Remote Sensing Lab under NMFS and ACA permits.

A single whale can consume over 5,000 pounds of krill in a day!

We are planning to visit some penguin colonies this weekend! I am excited to see what species may be present and if there are any chicks.  Check back with me next Tuesday for another mystery creature posting.

p.s.  A group that is closely related to squids called cuttlefishes are amazingly accurate with their camouflage. This video shows an example of their uncanny ability to blend in: https://youtu.be/pgDE2DOICuc